If I go back in time to the night he won the Big Brother Naija show, the question would have to be “why do people love Laycon?”

Because one thing is for sure, the people love him. It’s simple, he went in the underdog, nobody knew him then, then he started progressing.

Little by little, he started gaining attention. The longer he stayed, the longer people wanted him to say.

Coupled with the fact that he’s from the trenches, he’s also a cool and smart guy. Humble, wise, and calm.

All these are, of course, admirable qualities. And, based on the profile of past housemates, Laycon was one in a million. Everybody liked him for that prize.

Then there was the incident with Erica. That’s still one of the most talked-about events in Nigeria’s television history.

What happened that day led to his biggest rival’s disqualification, leaving him inadvertently unopposed. His win was inevitable, and the fans were happy. 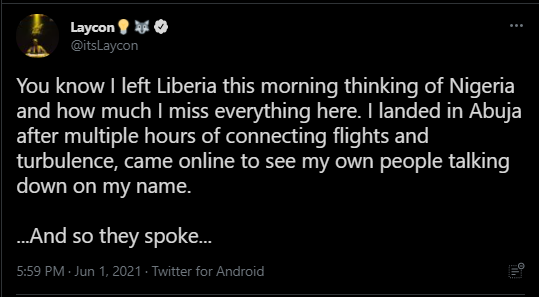 But why are people suddenly turning on Laycon and speaking badly about him? What could it be?

I chalk it up to three things. One, maybe they never loved him. You see, back during the Big Brother days, it was popular to be an icon or to support Laycon.

These days, though, it’s just as vicious as being a Tachastan, and it’s not for the weak.

Two, maybe it’s his music. His fans swear that he makes good music. Maybe it’s true. The music is good, but it’s not great.

His album at best is average, and can really use a lot of work.

He can go ahead and make hits because of his influence, but with this quality of music, it’s just average. I might be called a hater for saying just that, but I’m not.

Lastly, this could just be stan propaganda and no one is actually hating on Laycon. Because, earlier this morning, I checked the trends and all I could see was people talking good about him. So where’s this hate from?

Let’s hear from you.

Why Do You Think People Hate Laycon?